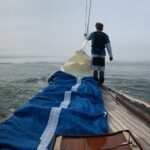 In Race 1 keeping an eye to the sky paid off for the Finish Blue Marlin (FIN-1) team, skippered by Henrik Andersin (Kotka, FI), who won the first race in very light and shifty winds. Blue Marlin (FIN-1) was mid-fleet leg when Andersin noticed “the clouds looked different than usual.” Anticipating a significant wind shift, he split from the fleet taking the left side of the upwind course and was second at the top mark close behind Flica II (K-14). 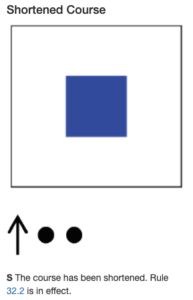 Blue Marlin (FIN-1) did benefit from the early gybe to the left and came first to the finish line followed by Flica II (K-14). Vim (US-15) who from the left side gybed next after Blue Marlin (FIN-1) and Flica II (K-14) finished third. The in 2013 built Nini Anker (N-15) finished 4, and Jenetta (K-1) managed to finish 5 before Vanity V (K-5), who was the latest boat from the fleet on the left side to gybe for the finish line.

The wind now completely disappeared but did rise from changing angles again.
After a pause for course adjustments, one abandoned start, and one general recall,

Race 2 got underway in a building 15-17 knot breeze with choppy seas.

Wings (K-15) and Jenetta (K-1) were close together on the left side of the upwind course going towards the top mark from the left on port bow. Blue Marlin (FIN-1) came on starboard and tacked on the top (slam dunk) of Jenetta (K-1) forcing her to fall a little off for free wind.

Wings (K-15), Vim (US-15), and Jenetta (K-1) rounded the first mark close together, and the three were still in the front of the fleet at the gate at the bottom mark.

Jenetta (K-1) however did not protest, but gained an inner overlap on Wings (K-15) and did a quicker hoist of the spinnaker having control over Wings (K-15) on her outer side.

Jenetta (K-1) decided at the beginning of the race to initially adopt a conservative strategy, as weather conditions were a challenge. Therefore, as Vim (US-15) on this last spinnaker leg sailed directly to the finish line, Jenetta (K-1), instead of challenging Vim (US-15) for the first place, kept control of Wings (K-15) and thereby held her position as second instead of risking it all.

Vim (US-15) skipper, Patrick Howaldt said: “It was very close racing in difficult conditions, the first three boats finished within one boat length of each other —this is a very closely matched and competitive fleet.”

With a combined score of 4 points VIM (US-15) was the winner of the day. Blue Marlin (FIN-1) finished second with 5 points and Jenetta (K-1) claimed her third place overall with 7 points:

The 2021 Evli 12 Metre World Championship is presented by:

PrevPreviousCaptain Sir William Burton
NextWorld Championship -Race Day2, Prayers of a sailmakerNext
Manage Cookie Consent
We use cookies to optimize our website and our service. If you click on the button 'Accept all', you agree that we set cookies for use in statistics. If you click on the button 'Only functional,' we do not set cookies for statistics - but we do use a cookie to remember your choice.
Manage options Manage services Manage vendors Read more about these purposes
Preferences
{title} {title} {title}